If you have been reading the the CSS 2.1 Specifications you may have come upon a couple of interesting terms: replaced and non-replaced elements. Let’s delve a bit deeper into what replaced elements are, which elements they include, and some examples of each.

Definition of a Replaced Element

I stumbled upon them while researching the width and height attributes of elements with different positions, and was confused about their meaning. Luckily, the specs provide a definition:

Someone may object and say, “well I can control the size of an image or iframe using css, so how come those elements are still considered replaced elements?” The answer to that is simple. The element itself can be styled using css, but the content can’t.

Therefore, an element is a replaced element if the CSS does not affect the text or other elements that are between the opening and closing tags.

Understanding where the Content is in Relation to the Box Model

For this we need to understand the box model. Check out the box-model diagram in the CSS 2.1 spec.

Starting from the outside going in you can see the following:

Content is the innermost part, and remember that the content is actually text and other elements inside the element.

Once again the CSS 2.1 Spec on content-width and content-height comes to the rescue:

The dimensions of the content area of a box — the content width and content height — depend on several factors: whether the element generating the box has the ‘width’ or ‘height’ property set, whether the box contains text or other boxes, whether the box is a table, etc. Box widths and heights are discussed in the chapter on visual formatting model details.

It is important to notice that height and width indicate the, “content area of a box”, i.e. not the actual content. Therefore the width and height property still apply to the element itself and not the contents directly.

It’s like controlling the width and height of your browser.

Besides that, width and height are not inherited properties and so the value of those properties should never be applied to the contents.

Let’s take a look at some examples.

Let’s make a CSS class to apply to all these elements that we will test:

Notice that I have chosen properties that correspond to the layers of the box-model discussed above, starting from the outermost layer, the margin, then the border, then the padding then the content area (height, width, background) then the contents (color, font-size).

Let’s make an image with no actual source, so it can show the alternate text.

The following is what we get: 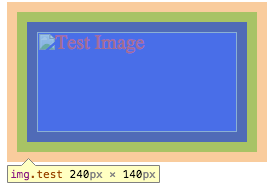 I have the chrome inspector on to show you the different layers of the box. We see the words, “Test Image” inside the content area. The words are red and have a font-size of 20px. That would seem to contradict that the img element is a replaced element. In fact, in this case nothing was imported from an external source and so nothing was replaced.

The following is the result: Notice that the dimensions are affected but the text in the image sure isn’t. The blue background belongs to the img element and only shows because the image has a transparent background.

The img element is a bit trivial because it is a self-closing element, i.e. it can’t have children. The iframe element gives us something more to play with because it is not self-closing. Let’s try it out without a src and some children and see what happens: 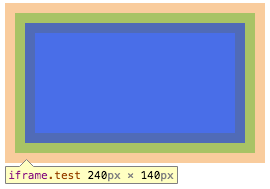 Looks like we got nothing for the content. That is to be expected because iframes only embed content from a src or srcdoc and don’t actually render the children.

Let’s try again with a proper source. Let’s make another html doc in the same resource folder and use it in the above code and put it as a src. 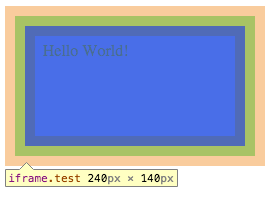 As you can see the words, “Hello World!” are black and are not 20px large as dictated by the class, “test”. Let’s compare this to having a div with those words inside: Clearly the contents of the div have been affected.

Non-replaced elements are pretty straightforward. Their contents are affected by the CSS in the document. That means that if a property can be inherited then the contents will inherit those properties from the parent, and any CSS that can apply to them directly will apply to them as was seen in the last example.